“Software-defined storage (SDS) is a computer program that manages data storage resources and functionality and has no dependencies on the underlying physical storage hardware.” - whatis.com.

"Gluster File System (GlusterFS) is an SDS platform designed to handle the requirements of traditional file storage: high-capacity tasks like backup and archival, as well as high-performance tasks of analytics and virtualization." - Red Hat.

While GlusterFS is clearly an enterprise technology, that does not mean that it cannot be used at home. To the contrary, I find it more flexible and scalable than those off-the-shelf Network Attached Storage (NAS) boxes. NAS servers for home users usually come in 2 or 4 bays. When the time comes to expand your system, it is not that flexible. You either need to change to a bigger box with more bays, or replace all of your disks with higher capacity ones. GlusterFS scales horizontally, meaning that you can add more servers to expand your storage capacity. For home users, adding more servers does not make any sense, since servers are quite expensive. This is true until you consider the ODROID-HC1, which retails for only $49 USD. Four ODROID-HC1s can be equated to a single 4-bay NAS at roughly 50% of the price. Furthermore, the ODROID-XU4 processor, consisting of four A15 cores and four A7 cores on each HC1, is already more powerful than the average NAS targeting the home market, which usually comes with a dual-core A15 processor.

GlusterFS is a POSIX-compatible distributed file system. It uses the Elastic Hash Algorithm to intelligently hash to locations based on path and filename, instead of relying on a metadata server like some other distributed file systems. Consequently, it avoids the metadata performance bottleneck, and can run on heterogeneous commodity hardware.

A volume is a collection of bricks. A brick is any directory on an underlying disk file system. Most of the GlusterFS operations happen on the volume. GlusterFS supports different types of volumes which are optimised for scaling storage capacity, improving performance, or both. You may want to refer to Gluster Docs at http://bit.ly/2zhI51S for a complete rundown. In this article, I will explore two types, namely replicated volume and distributed replicated volume which require two and four servers (or HC1s), respectively. In my opinion, these are the configurations most suitable for home use.

Using a distributed replicated volume guards against data loss when one server fails. It also enhances performance when you are concurrently accessing files which have been distributed to two separate servers. Instead of having one server serving up the files, two are serving up the files. Now that we’ve discussed the theory, let’s get our hands dirty building these volumes.

Figure 2 shows a photo of my setup. On the left are the four stacked ODROID-HC1s, and on the right is the ODROID-MC1 cluster. Both are resting on and connected to a 16-port Gigabit switch.

You’ll need to copy the OS image to your SD card in order to boot up your HC1s. Then, set a static IP address and a unique hostname to each HC1. You may want to follow the instructions under "Setting Up the OS on Each Computer on the Cluster" in my MC1 article at http://bit.ly/2lrzVhb. Change the host names to xu4-gluster0, xu-4-gluster1, xu-4-gluster2, and so on.

Install and Format the Hard Disk

Insert the hard disks into the SATA connectors of your HC1s. Type “sudo -as” to access root privileges and create a Linux partition using fdisk, then create an ext4 file system, as shown in Figure 3.

Create a directory called /gds/brick1, add an entry to /etc/fstab, and mount the file system. The result is shown in Figure 4.

This is done using the following commands:

Add the following line to your /etc/fstab (without the quotation marks): “/dev/sda1 /gfs/brick1 ext4 defaults 0 1”, then type the following commands:

The commands used are summarised below (run as root):

In a distributed replicated volume, files are distributed across replicated sets of bricks. The number of bricks must be a multiple of the replica count, which in our case is two. The order in which the bricks are specified is important. In the “gluster volume create” command, adjacent bricks become replicas of each other. This type of volume provides high availability via replication and scaling via distribution. In our command, we use four bricks and replica count two, resulting in the first two bricks becoming replicas of each other. This volume is denoted as 2 x 2. Figure 5 shows the output of some of the commands.

For those who only have two HC1s to create a replicated volume, you only have to use the command "gluster peer probe" on the other server and replace the "gluster volume create" command with the following command:

On another machine (in my case I used one of the servers of the ODROID-MC1 cluster), install the GlusterFS client as root and mount the volume:

Note that if you want the mount to be permanent, you have to add an entry in the /etc/fstab file.

This a simple test showing the distribution of files on a distributed replicated GlusterFS volume.
Create 100 files using the command:

The output of these commands are shown in Figure 6.

Login to xu4-gluster0 and issue the following commands:

You will notice in Figure 7 that 46 of the 100 files are saved on this server, since we are using a distributed replicated volume.

Login to xu4-gluster1 and issue the same commands: 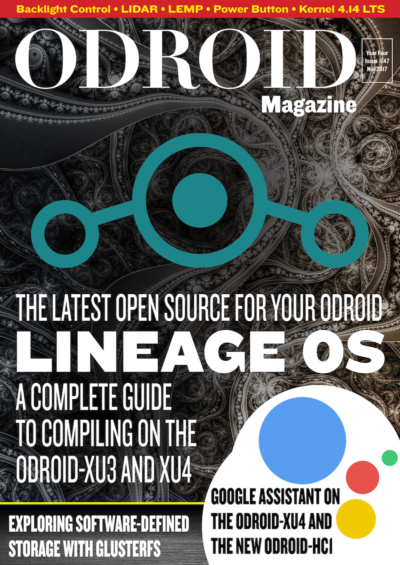