This article is not written to be a step-by-step guide on creating custom status display, but instead focuses on a general approach. To follow along, you will need a basic level of programming knowledge. Familiarity with any programming language will do, as I will look into where and how to find the information we need for our goal. That being said, I also included is a link to the project I wrote along this article, which is written in the Go language.

If you have a ODROID CloudShell or CloudShell 2 case, you most likely have been using the cloudshell-lcd package, and have seen how useful that information display is. My problem came from wanting more information to be displayed, and from the small text being hard to read on the CloudShell from across the room. I wanted something more visual that could be read quickly and instantly understood. Progress bars, seemed like a good enough answer, so there I went. Most of the information necessary can be gathered by reading files in /proc on Linux, this could be accomplished with the linproc filesystem.

Knowing that I wanted CPU, RAM, swap, networking, and disk statistics, I had a good place to start. Linux has made CPU usage, and most other stats, pretty easy as the information available in ‘/proc/stat’. More information is available at http://bit.ly/2jGKrRd. The first line gives us an aggregation of all the core statistics, with the following fields represented:

Since space is at a premium on our display, we're only worrying about the first line, since it gives us our total stats. The following command will print out only the first line from ‘/proc/stat’.

To gather our statistics, we need a delta, that mean we need to read the value, wait for a period of time, for instance 1 second, and then read another. The difference between these values tells us how busy the system was for that second. The numbers will be odd, they won't seem like timestamps, and there is a good explanation for that, since they aren't. They're a counter for what's called "jiffies". For finer grained measurements, such as actual processor time spent on each attribute, one would need to find the static value HZ from the kernel. This command should get that value. This value is roughly the number of ticks per second, which is 1000 on most intel compatible platforms, but embedded systems often use 100. For our purposes, we can just get a measurement of process vs work time:

RAM statistics can be pulled from multiple sources. For instance, one could read them from ‘/proc/meminfo’. However, I chose not to because the values are in kilobytes instead of bytes. I chose a direct syscall rather than opening a file with the resulting file processing. Below is a small program written in Go using CGO instead of the syscall package, which I did for simplicity. It uses “sysconf(3)”, which can gather quick memory statistics, for more information, visit http://bit.ly/2jBNXfI.

Swap statistics, on the other hand, can easily, reliably, and with no additional calculation overhead, be read out of the “/proc/swaps” file. It looks like this:

This is pretty self explanatory, and the size and used columns are both measured in bytes.

This one can be fun. First, you need to know what network device you want to measure. You can find this list in multiple ways. One way would be to parse “ifconfig -a” or “ip addr” output. This is a bit cumbersome when compared to other methods such as listing the contents of “/sys/class/net/”. On my system, this returns “eth0”, “lo”, and “wlan0”. Getting the interface speed is as simple as using the following command:

The next step is to measure our throughput. We will take periodic values like we used for measuring CPU usage. In this article, I'll be focusing on the eth0 interface, and the data I'm after can be found in “/sys/class/net/eth0/statistics/rx_bytes” and “/sys/class/net/eth0/statistics/tx_bytes”. They have a format like the following, which easily gives us basic network metrics:

There are two kinds of disk usage we might want to measure here: throughput and capacity. The first can be pulled similarly to many of the other statistics we've gathered so far from the “/proc” directory. The file “/proc/diskstats” will contain data similar to the following:

The fields are defined in the Linux kernel source tree in the file “Documentation/iostats.txt”:

It's easy to see how to find the throughput measurements, but what about disk capacity? One way to do it is with a bit of C (or Go, Rust, Nim, Python, Ruby, or whatever else that can interface to C) and the “statfs(2)” syscall. Go has a syscall package, as I mentioned earlier, that I'm going to use again for this particular example:

Saving that code to file as “disk.go” and running it will give you: 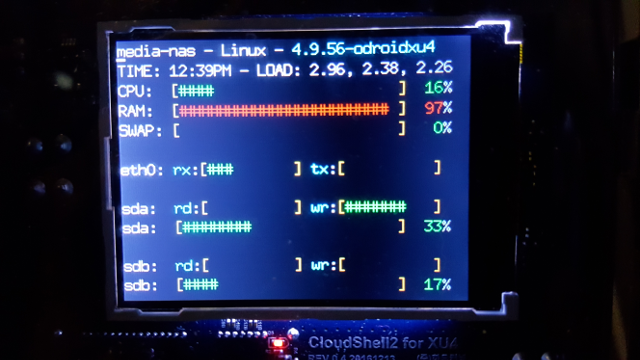 The new LCD status display on the CloudShell

This project was a fun one, since I got to play with several new things like CGO! I hope you've gotten something out of it as well. The project I alluded to in the beginning can be found on GitHub at http://bit.ly/2hEUa6B.