Please tell us a little about yourself.
I am an embedded software engineer and have been involved in many different commercial projects since 1994. Currently, I am developing the software for a mobile device runs on the ARM processor and mainly working on a device driver or a HAL/framework layer. I was born in South Korea, am married and have a 10 year old son. Since December 2015, I have lived far away from my family in Kitchener, Ontario, Canada. My family is still living in South Korea, and I visit them occasionally. I went to college in Korea and have two bachelor degrees in computer science and microelectronics. I studied microelectronics after having a few years of experience as a software engineer in an industry field.

How did you get started with computers?
I didn't have good enough marks in my high school to go to a university, so I decided to learn computer programming via job training courses which were available in my high school for pre-graduate students. Actually, I wanted to learn drawing which I liked the most at that time, but it was not available in the courses that I could choose. When I was 14 years old, I memorized a whole Apple //e BASIC programming learning book, even though I never entered a single line of code. For 6 months, I learned different programming languages and played with an IBM XT-compatible desktop and an IBM S360.

Since I could not afford to have my own computer before I got a job, I struggled to find a computer that would allow me to run my programs in MS-DOS. I also used computers to help many friends complete their homework projects. My favorite language was Pascal, which allowed me to become more familiar with programming architecture, but I turned to C/C++ for an embedded project at my first company in 1994, which has remained my main programming language until now.

Later, I became more interested in operating system and hardware design, so I finished a microelectronics course at another university. I had a project to design 16-bit computer hardware with NEC v25 and develop software to run a mono-color LCD and keypad. I could not affordable to build a custom PCB for this project, so I had to connect all signals with wrapping wires for 3 days and night to get "Hello world!" on serial output. This project encouraged me to learn about computer architecture and an operating system. I still have those original boards, but many components are missing since I had to use them for another project later.

Whom do you admire in the world of technology?
I admire Steve Wozniak. Many people remembers Steve Jobs who made a crucial technology history in IT industry. I believe that Steve Jobs could only realize his ideas because he met Steve Wozniak, who made a real thing and helped to extend the ideas of Steve Jobs. I always wished to be like him.

What attracted you to the ODROID platform?
I am more interested in resolving a problem rather than using a hardware for my own purpose. Many of Hardkernel’s team members were my coworkers at the another company before Hardkernel was founded. I tried to help the Hardkernel team resolve some problems that I experienced in other projects in order to realize my ideas on the ODROID platform. ODROIDs have more computing power than other SBC boards, and I like what the Hardkernel team is doing on ODROID for its users. I hope that ODROIDs will become more popular.

How do you use your ODROIDs?
Well, usually I don't use my ODROIDs for more than code development for ODROID itself. I've tried to use ODROIDs for the other projects as a prototype or personal purpose since, ironically, I am not a big fan of using an electronic device for my own personal interesting. I believe that ODROIDs have a big chance to become more popular and help many people. Therefore, I usually run ODROIDs when I find an interesting problem in the ODROID forum, or when some people asks for my help in person or by email.

You have created a lot of useful software projects based on ODROID technology. What motivated you to build them?
I have made many patches for Linux kernel and Android HAL/framework for ODROIDs. Most of them are meant to adapt the Linux kernel or Android BSP platform given by an SoC vendor. The rest is to help ODROID users use their boards more conveniently, so that ODROID boards can be more popular and users are more likely to use their ODROID boards than other SBC boards.

The CloudShell device for the ODROID-XU4 is a proof of concept for ODROIDs to run like a regular computer system. I have contributed many patches to the ODROID GitHub repositories as well as my own repositories in order to improve the features, but many of them are unfinished or suspended. I am trying to make a patch and contribute to Linux kernel mainline or Hardkernel's repository whenever I have time. I am also glad to help ODROID users resolve their problems as well.

Which ODROID is your favorite and why?
The ODROID-X is my favorite, since it was the first device that prompted me to submit a patch to Linux kernel mainline. I've submitted some patches to introduce the ODROID-X into Linux kernel 2.6, and spent a lot of time working on it as well as helping the Ubuntu desktop run on top of the Linux framebuffer in 2012. I created and submitted the ODROID board file, which is written in C, to the Linux kernel but the merge was denied, since, at that time, most ARM mainline developers were moving to a device tree rather than a board file in C. As a result, I had to spend a lot of time learning new things, and eventually my bare minimal device tree file for the ODROID-X was accepted in 2013.

What innovations would you like to see in future Hardkernel products?
I want ODROIDs to become as popular as the Raspberry Pi, and provide more hardware capabilities in a tiny hardware form factor for small hardware devices, and little bit larger version for desktop-like hardware. Maybe someday, very soon, ODROID would be the standard for ARM-based desktop platform for small computing, but still remain inexpensive enough for regular use.

What hobbies and interests do you have apart from computers?
I liked photography, but I do not have time anymore because of my busy life.

What advice do you have for someone wanting to learn more about programming?
I remind myself every day that I must write code to make someone else understand my idea with minimal explanation. I used to say to myself and my team members, not to go far away from what is necessary. Programming is just a skill to transfer an idea to a computer, and the important and difficult thing is to find the reason why the code is necessary, and why we want to do the task with a computer. If the reason and the goal are obvious, the programming skills will directly follow. 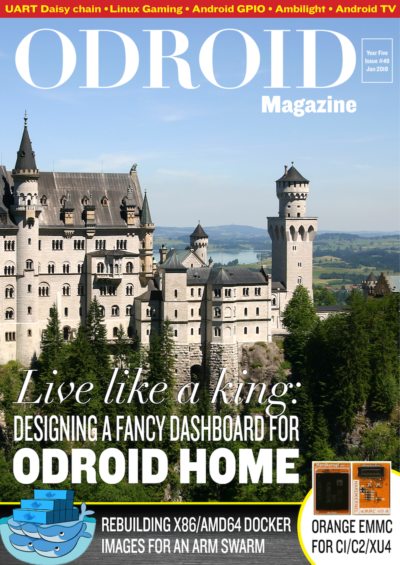